Dear reader, the author, whose book is now available, presents historical events from several perspectives, which makes the work versatile. Almost every country is mentioned, pointing out the complexity and transparency of the world.
The book is based on critical thinking, and discards unnecessary information. Politicians are assessed by their actions.

The content of the book covers a fruitful period of humanity with factual presentation of historical events. The author first begins with the Soviet perspective, where the history of the Soviet Union and the Soviet’s strategy of gaining power abroad can be clearly traced. After that, he also examines today’s Russia and goes all the way to Putin, which traces the history of Russia from 1945 to 2020.
In terms of the USA, too, the book starts in 1945, with a rigorous examination of all important events until 2020. The Soviet Union (Russia) and the United States had a fundamental impact on many countries. Thus, the history of almost every country in South America, Asia, Africa and Europe after 1945 is mentioned in the book.
The book places great emphasis on presenting the current situation, for example, by describing the most populous countries in the world.
Reading a history books such as this, the question may occur: what can be done? What is the solution? Fortunately, the author provides complex answers to current political issues.
Finally, I can only wish readers to enjoy reading the book as much as I did.

Introduction of the Book

The secondary data collection used for this book span over 14 years. The author’s bachelor degree in the university was in “Public Administration Management”. The author’s thesis/project work at the bachelor level was about “the cold war”. The author later worked as a journalist and documentary film maker. He has also founded a political party.

This book can be used as a textbook for modern history and further political training.  Since a  lot of educational systems in the world rarely contain modern history this book can be a helpful replacement in that sense. The book is also intended for those who are not students or politicians. Teaching about the post-cold war issues is not a common topic in the institutions of learning. Since the cold war much time has passed and many events have been experienced by mankind.

7.5 billion people live on earth. It is observed that if one does not follow global events regularly even for one year or two, one can easily lose sigt of the events and actions of the 7.5 billion people. Many people find it difficult to understand world events and so there is the need for a solid basic knowledge; hence, this book gives you this knowledge.

At the end of the book is the presentation of the contemporary world events and the fight against corruption. The target audience is primarily the politicians, government bureaucrats, UN employees, political journalists, fans of modern history, fans of politics, NGOs and aid/relief organizations.

Since I speak English on a casual level and needed someone to help me review the content, I asked Dr. Nicholas Imbeah (formerly of Szent István University) to help me review the grammar and content of the English book. Dr. Nicholas Imbeah is an expert in regional development and tourism who also taught beginners’ English course at Szent István University as a voluntary work.

Furthermore, I would like to thank a Hungarian book publisher for reviewing the preliminary Hungarian version and thank the library of our Gödöllő city, where I found the history of many countries around the world. Furthermore, I would like to thank the scientific workshop of the Hungarian Armed Forces for publishing many books on the modern history of the countries where there are peacekeeping operations. These publications helped me to appreciate the modern issues about Africa, India and Pakistan better. 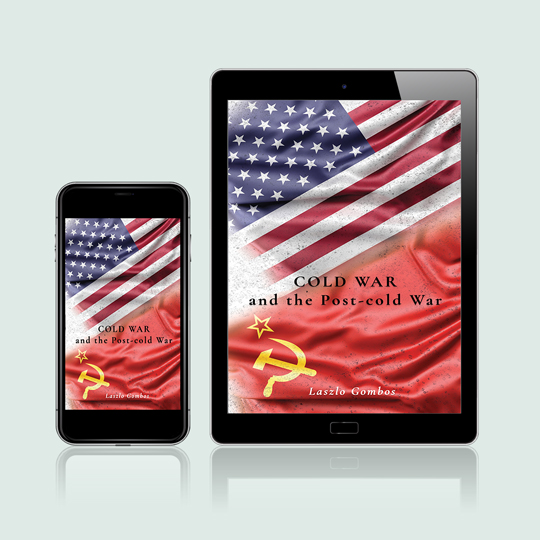 Definition of the Cold War

The cold war was from 1945 to 1991, from the end of the WW2 to the end of the Soviet Union. The concept of the cold war: The reason we call this period “cold war” is because the USA and the Soviet Union did not make war against each other. However, it did not mean it was a peaceful time. Moreover, these two countries contributed a lot to the compounding of the war, for example: Vietnam War and Korean War.

The Days of the Empires in the 20th Century

With the falling of empires, humanity has experienced more and various democracies in the 20th and 21st Centuries. Before the WW2 the world had just 20 democracies and these 20 democracies had deep problems, namely, a lot of election irregularities (cheating) and dictatorial societies. In the second part of the 20th Century things have changed. This will be discussed later as we go forward in the book.

The most powerful countries in the cold war: three periods can be identified during the cold war. i) The first period: The Soviet Union, the USA and the British-France colony empire existed in 1945. The Egyptian conflict,[1] the British and France colony empires collapsed in 1956. ii) The second period: After 1956 only the Soviet Union and the USA survived. iii) The third period: China and the Soviet Union broke up the alliance,[2] that was why China became independent and  powerful country. China became the 3rd actor in the cold war in the 1960’s.

Strategy of the Soviet Union

Fundamentally, the Soviet Union prepared their army to attack other countries. The Soviet navy was weaker than the navy of USA or England. The Soviet Union had strong field army. Their mortars and aircrafts only have to help the field army.[1] They have improved rockets and a lot of rockets have become nuclear weapons. The nuclear weapon has one benefit, that they use it for bullying other countries including extortion.[2]’[3]

The goal of the Soviet leadership is to get Asia and Africa resources and stop the USA from having access to oil in the Middle East. That is how the Soviet Union has been able to rule the world.[4]

The Viewpoint of the Big Powers Army in the Cold War

The Soviet Union cared about the quantity but they did not care about the quality. That is why they had 55,000 tanks, 117,000 other armored vehicles, 8,000 katyushas rocket launchers, 4,300 helicopters, 7,900 army aircrafts and a lot of millions hand weapons, 273 submarines, 6 aircraft-carriers, 33 battleships and almost 800 smaller army ships. Though these might seem good, the weapons are now archaic and must be upgraded or changed to modern version in 10-12 years time. Lack of money has become a constraint to the Soviet Union in their desire to modernize these weapons.[1]

There was a serious risk among the Russian soldiers: the Russian society needed democracy and this became a struggle because the Russians wanted to practice democracy like other democratic countries. That was why in the past it was a risky thing to send Russians to other democratic countries ‘because the conqueror could become the conquered’. In this case Soviet Union’s occupation of Western Europe could break down the fighting moral and possible mass desertion between and among the Soviet army. A good example is the Hungarian revolution in 1956; the revolution was cracked down by the Asian Soviet soldiers (Soviet Union had European and Asian soldiers.), because these Asian Soviet societies have never heard of democracy before. The Russian soldiers were passive in Hungary and a lot of Russian soldiers stepped into the Hungarian revolution’s side. Although in that time Hungary was not very much democratic or improved, their fighting morale was cracked down.[2]

Basically the cold war began becuase of Stalin and his power hungry colleagues. Stalin was a mass killer before the WW2. He was suspicious of other people. Stalin’s behavior was confusing because his brain and his soul became deformed due to the lot of terrible things he did. He became lonely because he killed his associates inside the power circles and his family. The Soviet soldiers tasted the freedom in the front lines in the WW2, where nobody brainwashed them. Stalin later handled the ex-soldiers as enemies after the war. He lost the control in the world war in Leningrad (where the Germans did not rule too) that is why Leningrad was a free town. After the world war, Stalin sent Leningrad citizens to the gulag Stalin’s extermination camps.[3]’[4]

Why was the dictatorship in the Soviet Union brutal? Because there had been very little money and very less power due to poverty. After world war one (1914-1917), after the Russian civil war (1917-1921), after mass killing by Lenin (1921-1924), after mass killing by Stalin (1924-1941), after the WW2 (1941-1945), Russia bacame a big ghetto. On the other side, USA had big and improved cities with wealthy citizens, all of these gave big power to the political leadership of the USA. The politicians did not need to have all power in the United States of America. In the USA a lot of groups had power in the form of political leadership, companies’ managers, civil sector organisations, trade unions, etc.

The Soviet strategy was to rule the world. However, the USA’s strategy was only to try to stand against the Soviet’s steps. Admittedly, the USA was extremely active in South and Central America.[1]

In the USA’s strategy, we can see that their wealth made them lazy. Before the world war one the society of the USA was peaceful. Theoretically they had big power but they did not use it for a long time. In the WW2, the USA’s leadership made the American society more agressive and more soldierly.

The USA soldiers could not fight against intent, fanatical enemy, for example, Korea, Vietnam, Laos, Cambodia and currently the Islamist fanatics. When the US soldiers were abusive against the enemies it showed they did not respect the enemies. That was why their behavior in a long war was just as an inordinate rabble. The 20th Century showed that when the US elite soldiers could not solve a conflict the strategy of the USA army collapsed and they started killing blindly for example in the Vietnam War.[2]

When the US field army went somewhere and the USA failed, for example in Iraq, Afghanistan, Korea and Vietnam their failure would mean endless war for nothing.

Since the USA never met any serious enemy on their border the US developed their navy. The marine soldiers could not fight for longer period in field war. The US Navy needed a lot of oil. Because they could not go home every time they needed oil, they managed to create lot of navy bases around the world. Currently the USA has 120 army bases in the world, for example, in Japan,[3] South Korea, Turkey, Saudi Arabia, Iraq, Afghanistan, Germany, England, Spain, Portugal, Australia, etc. That is why the Soviet Union wanted to stop the transport of the Middle East oil from the USA (navy). The USA developed the aircraft to high level. The navy and the aircrafts made some success for the US but if they had to deploy the field army the USA would be in a big problem.[4]

The USA assists sponsoring dictatorships all over the world. For example, South Korea and South Vietnam; both were dictatorships for a long time. Afghanistan and Iraq are dictatorships until present time. The USA gives a lot of money, soldiers and weapons to the dictators.[5]

The western financial world is the example of the irresponsible business functioning. The USA from time to time, creates financial crisis in the USA and in the USA’s allies.